Spiderman is Cool. Spiders in My Home Are Not! 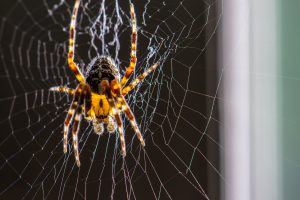 According to Psycom.net, 5 out of every 100 people are frightened of spiders. We beg to differ in favor of it being a lot more people who do not want spiders in their homes. There are 71 common spiders that you may or may have to deal with and they don’t swing from building to building, saving people’s lives. If that is you or a significant other yelling about ‘why is there spiders in my home???’ read on!

Spider activity is at its worst in Virginia, Maryland, and Washington, D.C. from late August through the fall. After a summer of feeding, they’re huge, reaching their full growth and maturity. The males tend to come out of hiding at this point, looking for a mate. Lots of insects in the area at this time of year mean spiders have a lot of food sources.

Soon-to-be-daddy spider isn’t looking to skitter over your toes. It's actually looking for a mate. If it finds one, the female will likely lay eggs in your home, assuming the mate the male finds is also in your home. Soon enough, the eggs will begin to hatch…

When are Spider Infestations the Worst

While you can be the unwanted victim of a spider invasion throughout the year, it's far more common in the fall. Technically, the infestation has already happened and the spiders are just a bit more active. Active spiders are not as reclusive and are more like to be spotted.

It's often said that the average person swallows up to eight spiders a year in their sleep. It's such a common saying—and, of course, everybody knows their mouth falls open when they fall asleep—that it is ingrained in our minds as fact.

The truth is, we don’t swallow any spiders but that doesn’t mean your bedroom isn’t a regular highway for visiting web crawlers while you’re comfortably dreaming the night away. Fall mating is not the only reason spiders seem to be more mobile.

They are also attempting to come in from outdoors. They are attracted by food, shelter, and sources of water, all of which your home may offer in abundance. Spiders aren’t the only ones looking for winter room and board.

What To Watch For Spiders In My Home

There are a few obvious signs you’re dealing with spiders in your homes, such as spider webs or you just saw one crawl across the linoleum. Some signs are less obvious, however, and if you see them, it's time to start paying close attention.

Depending on the spider, egg sacs aren’t enormous. But it's no joke that some egg sacs can release hundreds of spiders. That’s an entire army of eight-eyed, eight-legged, creepy crawlies roaming around your house.

They’ll be in your pantry, in your dresser drawers, in your lamp shade when you reach to switch off the light. You will find them in humid and warm areas, such as behind the washing machine or hot water heater. They’ll make their way into your bathroom, up your faucets, and down your drains.

You’ll never be able to enjoy a hot bath with your eyes closed again. Imagine how many times you pass through the living room each day. Now imagine how many eyes, unbeknownst to you, follow your progress each and every time.

If a lot of flies and insects tend to get in your house, you had better believe spiders do too. In fact, spiders are more likely to infiltrate your cozy little home if there are lots of insects flittering about. What better place to set up shop?

Spiders are just like you. They get hungry and it makes sense to go where the food is. That’s why it's very important to keep your home as insect free as possible.

There is no more obvious indicator than reaching behind the end table to pick up the dropped remote and feeling your hand penetrate a thousand sticky, silky strands of cobweb. If you don’t jerk your hand back in horror, you have no soul.

Spiders don’t normally spin webs in high-traffic areas. For the most part, they'll build their homes in out-of-the-way places, such as behind the end table and the aforementioned humid, dark areas of the house.

There is a such thing as a one-off spider, meaning that it's a solo spider and the exception rather than the rule. However, seeing one is cause to keep a keen eye out. Seeing two, especially in a short time, means you need to start your own investigation to determine the extent of the damage.

How Can I Prevent Spiders in My Home?

If a single egg sac ends up hatching, you should probably call in a professional. A professional exterminator such as My Pest Pros specializes in just this kind of thing. We can work with you to eliminate and prevent spiders from becoming an issue in and around your home.

You can always try and tackle it yourself but a horde of raging baby spiders pouring into every escape crevice, crack, and opening they can get to, is not the sort of thing you should tackle alone.

Call My Pest Pros at 703-665-4455 for help eliminating spiders from your Virginia, Maryland or Washington, D.C. home as well as other pests.